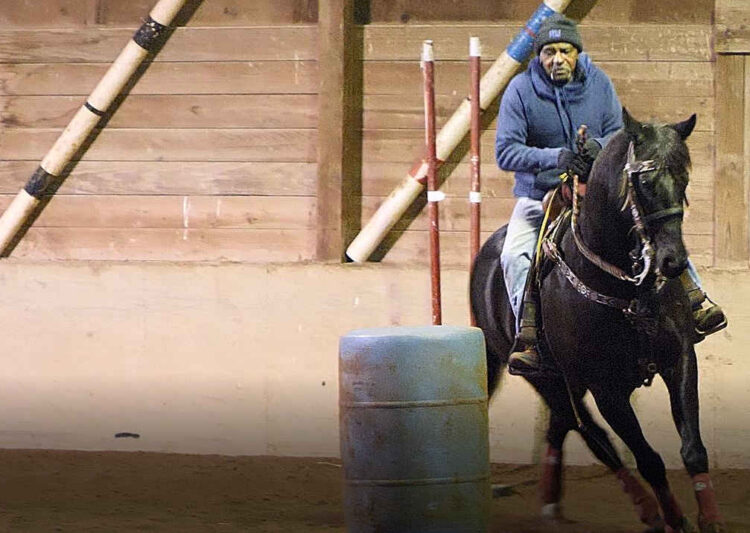 We recently met up with Barrel Racer and Gymkhana trainer, Ozzie Morris. A champion in Gymkhana events in multiple states for over a decade, he is a pioneer in the horse world as a self-taught rider and person of color who achieved great success in what he does. Amazingly, he said with all his success, he hasn’t spent over 1000 dollars on a horse, stressing it is the training that is the most important part of the equation. We recently had a fun evening watching him train with his students, Anita Corrado and Andrea Crawford at Millbrook Farms in Gardiner, NY. (video)

Growing up in Nyack, NY in Rockland County, Ozzie Morris’s desire to ride horses could have easily been a fleeting fantasy like so many of us get as youngsters when we declare what we want to be when we grow up. Watching westerns on tv as a kid made him decide he wanted to be a cowboy. Forget the fact that being a young black kid from the NY suburbs in the sixties, made that possibility seem very unlikely. Determined though, he started working at a local stable in his teens to gain experience, however, he only was able to clean stalls and still did not get the chance to ride. When he was 18, he was finally able to buy his own horse, and basically self-taught himself and his horse by observing others. Starting out in open jumping which “was a lot of fun”, Ozzie quickly decided winning money running barrels trumped winning ribbons in open jumping and the rest is history.

After continuing his self-education during this time, he really broke onto the scene with a young unbroke horse he got from an auction that was as Ozzie put it “wild and nuts, broke my arm, broke my leg”.  Through kindness and perseverance, a year later the pair had worked out their differences and was winning 12 out of 14 events.

For anyone who is involved professionally with horses, it is obvious that the industry suffers from a lack of diversity. There are just not as many opportunities available to minority and disadvantaged populations to move up in the horse industry. But for the determined few like Ozzie, it certainly is possible. At one point at the World finals, he was the only black rider out of 1800 and managed to come in 11th on Aladdin, his adopted Arabian he trained from a baby. However, being a trailblazer is usually not easy and as he was continuing to show and improve himself over the years, Ozzie states that he saw his share of racism, some of which was quite severe. His best method of coping with it he told us was by winning, taking their money, and always being polite and a gentleman back without backing down. This attitude and his own talents gained him respect and a growing pack of admirers and advocates throughout his career.

While horses were always his love, Ozzie also worked with kids for 30 years at St. Agatha’s in Rockland County. Working first with handicapped and autistic children he later changed over to working with neglected and gang kids, introducing them to horses and teaching them to ride.  “I thought I could make a difference which I did, but when kids hit a certain age and (are) in gangs, it’s hard to bring them back…so I showed them a different way”

Ozzie did this by taking the kids on day trips to stables so they could see horses and a different world than what they were used to. In this respect, he has been a role model for so many kids over the years encouraging curiosity, teaching them to ride, and inspiring local kids from the area that they too can follow in their dreams if they really want to.

By exhibiting patience and keeping it fun, he teaches his students how to be the result they want from their horses and how to ride as precisely as possible.

When asked if he felt he had reached his goals as a trainer, Ozzie told us that even at 71, he still is learning and that “you can always go further…”. A sentiment I am sure we can all agree with.

If you would like to find out more about Ozzie and his services, you can contact him at his farm, Wind Chaser Stables in Pine Bush, NY. 845-475-5455, windchasersny.wixsite.com

Ozzie is a wonderful trainer, so good with the horses and students. What a special man.

I’ve had the pleasure to know Ozzie for over 30 years. I’ve seen him start and train many kids and adults through the yrs. has well as horses. He is well known and respected throughout the horse community. He is a natural when it comes to horses and teaching people to ride. I’ve seen him start students with no horse experience and make them champions.